On Sunday I was teaching about Mark 10, the part where the Pharisees offer Jesus a rather controversial question about marriage and divorce to which there was no real contemporary consensus. The Jewish canon sometimes preserved the dialogue more than conclusions, so I think this kind of discussion was pretty common. Some people think that the Pharisees, to whom Jesus held many political and religious similarities, were trying to trip up Jesus and certainly the way that Mark portrays the political party that seems likely in the narrative. Nevertheless, Jesus answers the question about the law in a way that elevates the meaning of the law above its legal purpose. He tells them that a divorced person has committed adultery. The key to the teaching though isn’t a larger sense of judgment, which some people may take from the text, but that Jesus is concerned with matters of our whole selves and that the cornerstone to his whole mission is not just an elevated sense of the law, but of love and grace.

Jesus does not take a “side” on the argument, but rather elevates both and offers us a third way. He cuts through the politics and gets to the truth. He is not making a principled argument, but one that is deeper and fuller than principles. This third way is challenging to get to in our current context; the world just doesn’t give us many opportunities to engage in it. 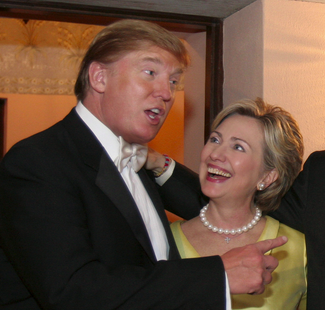 The political spectrum in the U.S. alone gives us an illusion of choice (this time between two New York elites), which denudes our choice all together. But even if it were an authentic choice, it is a dichotomized one. It’s either/or, black/white, two-dimensional. I think with such a simple choice, participation in a movement can be easier, but I also think it’s cheaper.

Even the smartest intellectuals, who themselves are not very dichotomized, don’t get to a Christlike third way, but rather move us to achieve something of a Confucian sense of balance. Nick Kristof may well be my favorite New York Times columnist and in Sunday’s paper he wrote a column about the intellectual biases of academic institutions, who seem to hold a prejudice against conservative thought. He influenced me because I’m more likely to live in a quasi-liberal echo chamber. But still, in his world, salvation is achieved through equity, justice, and balance. Those things are nice, but not the end of the story. It’s not about power, and who gets it; it’s not about equal rights or liberty, either.

And my new favorite thinker, Jonathan Haidt, offered a TED talk to a mostly-liberal audience about the virtues of conservatism and why, along with so-called liberal ideas, are important for society. He cites the “Asian religions” as the ones who have achieved this the most, and most notably shows an image of Vishnu the Preserver and Shiva the Preserver, two of the highest gods in Hinduism who channel, summarily, the virtues of the left and the right, holding that balance that’s so important.

I’m not sure Jesus is very interested in balance, but he is interested in the radical alternative. Radicality can sometimes just get translated to being extreme, so we think we are really following him if we are extremely expressing ourselves (usually left or right). The response to such extremeness may be the banality of the mean. The average. The mundane. The mediocre. So we might think that truth is found if we just find the middle ground. I think there’s a fallacy there, too. We may do violence to the truth if we always say “both sides have a point.” The average of the “sides” is not good enough. We are finding another way and that other way isn’t simple, easy, or reductionistic. Both sides do have a point, Kristof and Haidt are right about that, but discovering those points isn’t the end itself.

Christianity is not a simple religion, which might be the biggest challenge that Christians face. Jesus’ third way is a radical reformation of the ways of the world. St. Francis of Assisi understood this, and so did the historic Anabaptists. I say historic because there is only a remnant of Anabaptism in the dividing Mennonite congregations and in the Evangelicalized Brethren In Christ. But I still think there is hope for our third way of life, but it will take some intentionality.

Let’s go back to Jesus and think about Pentecost for a moment. The Pharisees listed above probably wanted their Messiah to come and bring a kind of political revolution. It’s hard to read Chronicles and not move with the Chronicler toward his or her call to centralized Davidic power again (#thanksjosiah). It’s even harder when Jesus apparently is born into the line of David, the ideal king of Israel. They are expecting a political revolution that brings prosperity and national recognition to Israel again. Jesus didn’t come to bring a political revolution (and still doesn’t, despite the Constantinian shift of our faith).

But at the same time, he didn’t come to bring a kind of acquiescence to the status quo. That is to say, he wasn’t with the other big political party at the time (the one with more power), the Sadducees. He wasn’t ready to get into bed with the Romans and just submit to whatever the Empire was giving him.

The way the Gospels tell the story, both of those groups of people (the dissatisfied Jewish nationalists and the Imperial powers) crucified the King. Ironically, he brought together two opposing forces united in the goal of killing him.

But the third way comes after that. It’s in resurrection. Jesus subverts the ultimate dichotomy of death and life by defeating death and eternalizing life. Moreover, he opens up the Kingdom of God to all people, both Jewish and Gentile, giving them all a chance to be a part of a new way of life. This idea finds its fullness as the church is born on Pentecost, when Jewish people from all over the world gather to receive the Holy Spirit. They now have access anywhere and anytime, not just within the confines of the Temple or in the political structure of the day. The church is fundamentally a third way movement, and we need to be wary, then, of the ways that the sides of the spectrum seduce us to their extremes, or subsequently average us out into nothing.