Encouragement for a lifelong journey of faith 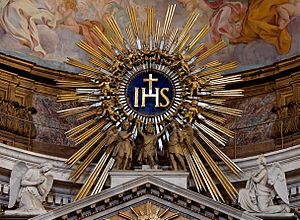 IHS monogram, with kneeling angels, atop the main altar, Church of the Gesù, Rome.

Therefore God also highly exalted him
and gave him the name
that is above every name,
so that at the name of Jesus
every knee should bend,
in heaven and on earth and under the earth,
and every tongue should confess
that Jesus Christ is Lord,
to the glory of God the Father.  — Philippians 2:9-11

Everyone who calls on the name of the Lord shall be saved. — Romans 10:13

Repent and be baptized, every one of you, in the name of Jesus Christ for the forgiveness of your sins. And you will receive the gift of the Holy Spirit. — Acts 2:38

Paul became so annoyed that he turned around and said to the spirit, ‘In the name of Jesus Christ I command you to come out of her!’ At that moment the spirit left her.  — Acts 16:8

‘And whatever you do, in word or deed, do everything in the name of the Lord Jesus. — Colossians 3:17

On the 10th day of Christmas, many Christians venerate the holy name of Jesus. Most denominations let this worship rest on one day a year, but in the early 1500’s some people devoted every day to the holy name and even built church buildings to emphasize it (as in the picture above). Devotion to and veneration of the IHS monogram, derived from the first three letters of the Greek word for Jesus, ΙΗΣΟΥΣ (and sometimes also interpreted as Iesus Hominum Salvator, Jesus savior of humankind) dates back to the early days of Christianity, where it was placed on altars and religious vestments, ornaments and other objects.

Here is an evangelical example of  praising the name of Jesus

The literal name “Jesus” is not inherently powerful; it is powerful because of Jesus Christ, the person, God incarnate, who made a way for our salvation.

Jesus taught his disciples to pray in his name: “And I will do whatever you ask in my name, so that the Son may bring glory to the Father. You may ask me for anything in my name, and I will do it” (in John 14:13-14).  Some misapply this verse, thinking that saying “in Jesus’ name” at the end of a prayer results in God’s always granting what is asked for. This is essentially treating the words “in Jesus’ name” as a magic formula. If you have tried it, you know it is not so. We come to God in the name of Jesus like anyone approaches a place that might not open to them if they did not have the proper connections: “Open up in the name of the law!” or “Joe sent me” are other examples. Praying in the name of Jesus shows respect and acknowledges that we come into the presence of God by the work of Jesus. Coming in our own name or in the name of something else could be dangerous to our spiritual health!

We have also been following the popular Christmas carol through Christmastide. Again, the history of the carol is somewhat murky. The earliest known version first appeared in a 1780 children’s book called Mirth With-out Mischief. (A first edition of that book sold for $23,750 at a Sotheby’s auction in 2014). Some historians think the song could be French in origin, but most agree it was designed as a “memory and forfeits” game, in which singers tested their recall of the lyrics and had to award their opponents a “forfeit” — a kiss or a favor of some kind — if they made a mistake. Many variations of the lyrics have existed at different points. Some mention “bears a-baiting” or “ships a-sailing”; some name the singer’s mother as the gift giver instead of their true love.

The idea of the song having secret meanings to help suppressed Catholic children understand the catechism has been well debunked [Snopes got involved]. But we’ve been playing with that, anyway. The ten lords a-leaping could stand for the Ten Commandments: 1) You shall have no other gods before me; 2) Do not make an idol; 3) Do not take God’s name in vain; 4) Remember the Sabbath Day; 5) Honor your father and mother; 6) Do not murder; 7) Do not commit adultery; 8) Do not steal; 9) Do not bear false witness; 10) Do not covet (Exodus 20:1-17). Why shouldn’t you know the Ten Commandments, anyway?

Pray in the name of Jesus: I bow my knee before the name above all names. I repent of my past in your name, Jesus. I call upon your name for my future. Whatever I do, I seek to be worthy of your name.

If you have never memorized the ten commandments, here is your chance.

We are not an “honor” society, and we prize coming in our own name, according to the rights we have as free people whose ancestors have died to give us our freedom. So the subservient humility of today’s readings may be a bit lost on us. We may not receive the honor of coming in Jesus’ name and we may not give it by assuming we can come in any other name, as we choose. Consider what you do when you pray, especially.

About this Daily Prayer

At this site we will enjoy many different voices who are being asked to take a week or two at a time to lead us. They may have a theme to follow at times, especially when the pastors are taking their turns, they may lead us through a book, or just give us what they think we need. It can be used on its own or in conjunction with our Way of Jesus website found here.

Theme by Anders Noren — Up ↑