I wonder how many of us will watch Avengers: Age of Ultron as it comes out this week. It’s 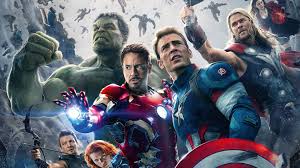 probably going to break records. For many of Americans, the rising of an inhuman an evil trying to destroy the community is not only fictitious but entertaining to watch the fanciful nationalists defend us against it. Others see the Powers more clearly, like the apostle Paul offered in his letter to the Ephesians “For our struggle is not against flesh and blood, but against the rulers, against the authorities, against the powers of this dark world and against the spiritual forces of evil in the heavenly realms.”

In Baltimore, it shouldn’t be hard to see something dark allowing a 25yr old to get killed for running after making eye contact with law enforcement. Six cops are suspended with pay and the department admits they should have buckled him in while in custody as well as attended to his medical needs sooner, multiple times. Although I think seeing that white supremacy inherent in the system actually requires some work for many Americans. We see burning cop cars, angry black people, and the headlines filled with “riots,” “looters,” or worse. We don’t see the inhuman circumstances that lead up to the outbursts or even the “peaceful” protests after Freddie Gray’s funeral. As a society, we see the destruction of property before the destruction of human life or community.

reported differently reflects a majority public opinion, we know that crowds burning stuff because Joe Pa got fired for not protecting kids from his sexual predator friend is different than Baltimore. Baltimore’s unrest, riots, or uprising stands as a challenge to white supremacy. It might be easier for you to see people damaging stuff than it is to see dead people. It might be easier to make suggestions for how desperate people should act than to stay focused on what makes them desperate.

I’ve noticed more “unfriend threats” on Facebook in the past day than in the last half a decade combined. Many by white people who are trying to be clear that they will no longer tolerate sympathy for the state/property without empathy for another loss of a black human by unreasonable policing methods. I wish it didn’t shut down dialogue or cut of relationships-even virtual ones but I get it. We all have our limits.

I actually saw this picture in my FB feed yesterday. You can read most of the original post [that not only got taken down but the profile deleted] with some commentary in this article.

While I haven’t talked to or seen the poster in almost 20 years, you might think “how can you still have a connection with him?” While admittedly, the connection is thin but I hope he reads this post. I want to influence him. If he was in the Philadelphia region, I would want him to get compelled by Jesus to see a bigger world than he’s been exposed to and get in touch with a healing agent that actually forms something more powerful than even the atrocity-spawning Powers.

I think forming the Church with Jesus actually heals the brokenness of the world. I also march (why not come out on Thursday?), organize, make deep relations with different kinds of folks, live in an urban whatnot, practice peacemaking, village parent, etc etc etc. I see Jesus still out there getting pushed around and told to be calm while thousands of national guardsmen and riot cops move to restore “order.” We are still angry because it’s actually this order that perpetuates ultraviolence here and abroad and doesn’t bring justice. We still don’t know who killed Brandon Tate-Brown. The War of Terror isn’t slowing down.

My sense of the Age of Ultron is more than a film about techo supermilitary turned back on its perpetrator/creator (like so many of my favorite robot stories). In real life there are no Avengers, only those moved by the Holy Spirit to resist & restore. We have an opportunity to take a deep breath of the Holy Spirit,  looking for something real in fiction while Jesus unmasks the fictions in reality. Let’s be considerate in our conversations and see. Maybe we can compel more people to come together and create something beautiful with our Creator even while we fight against the evil of our times.