I’m not totally sure how I got on an Ezekiel kick, but I’m on one. While talking to a couple of cool pastors the other day at the Urban Anabaptist Ministry Symposium in Philadelphia we got on the topic. They told me that they stick to Ezekiel’s “greatest hit” – the Valley of Dry Bones. The other week I dipped into this prophet while going through the story about the destruction of the cities Sodom & Gomorrah. God, through Ezekiel explains the sin of Sodom was that “She and her daughters were arrogant, overfed and unconcerned; they did not help the poor and needy.” If there ever was an Old Testament prophet with a one-hit wonder for pastors – it’s Ezekiel with Valley of the Dry Bones and its “B-side” about Sodom.

Since got into chapter 4 the other week, I haven’t been able to leave it alone. The big WOW is after God explained that he was to suffer for the collective sins of the covenant people through a 390 then 40 day session of laying on the ground while eating meager food & water and “playing dolls” version of a siege playset. “Eat the food as you would a loaf of barley bread; bake it in the sight of the people, using human excrement for fuel.” That’s pretty amazing. God says poop.

We could act like four year olds and stop there, but then we would miss out what is happening in the longer arc. Ezekiel, beginning his prophetic ministry in his early 30s is both re-enacting the sins of God’s covenant people and showing the future destruction of the city while he and his 2,999 other Jewish elites are in Babylonian exile. Through a very colorful display, God is trying to get his covenant people to deal with their collective sin – turning away from God as their king, moving out of being one people, and losing hope about their future. I think this is an engaging liturgical theater rife with politics, certainly causing problems but useful to God’s cause of restoring the covenant people back to the path of God’s harmony. Then comes a lot more preparation before the more popular word about Sodom and finally the dead dead dead things being made alive again. 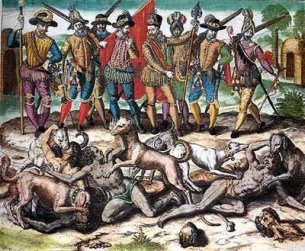 One artist’s rendition of what Columbus Day is really celebrating

collective sins in North America. For starters, I’m concerned with the systems that benefit a small group to the exclusion of many trough the land theft/abuse and genocide of the people God made a covenant with about taking care of this land thousands of years ago and the Trans-Atlantic slave trade and generations of rape and forced unfree labor of Africans. How long will our sisters and brothers in Christ shrug off dealing with this set of unreconciled brokenness with “you still talking about that?” “shouldn’t you just get over it?” or “it’s really not racial injustice any more – it’s really a class issue.”

I don’t think Jesus is laying more guilt trips, I think Jesus is empowering us to do something substantive about it. Through the work of the Creator of the universe, we are capable of experiencing a oneness with God/creation/one another that unravels these systems and forms a healing balm to the atrocities bringing us back to Shalom. Our question is less about whether we have the responsibility to deal with our collective sins. Our question has more to do with what we’ll do with our Spirit-filled imagination in the restoration of God’s Shalom.

Theatrics have been part of good protests as well as worship for a long time. I don’t have a high tolerance for regular worship to be overly theatrical, but I do love the occasional Christ-centered demonstration. Can using some symbolic acts – even costumes – help make a deeper point to people who might not otherwise pay attention or be interested?

I think for many of us, like Ezekiel, the process will include suffering – but not as much as those who already suffered. If we use our prophetic imaginations, at least the suffering will be productive and the theater fun. Since around two billion people use dung for fuel (including our boy Ezekiel) can we not also use the proverbial excrement of life (our collective sins, personal failures,  etc) to fuel the daily bread of change?