Rejoice always, pray continually, give thanks in all circumstances; for this is God’s will for you in Christ Jesus.

Do not quench the Spirit. Do not treat prophecies with contempt but test them all; hold on to what is good, reject every kind of evil. 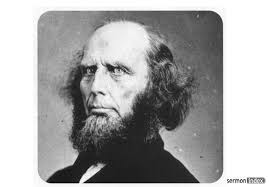 One time someone brought a shotgun to one of Charles Finney’s revival meetings, intending to kill him. May you cause that kind of trouble as you defy the powers!

Some people might not think Finney fits into the “cloud of witnesses” that make up our respected spiritual ancestors. He was the “father of modern revivalism.” He was the forerunner of Billy Graham in the sense that he popularized the “altar call” and other tactics many find a bit too coercive or manipulative. But his demands for living a truly Christian life, his determination to get something going, and his presumption that people could live up to their radical calling, is right up our alley. He was also among the first to have women and African Americans participating in his meetings as equals with white men. One story is that the altar call’s original purpose was to come forward to sign petitions to abolish slavery.

The zenith of Finney’s evangelistic career was in the 1830′s during the Second Great Awakening. In Rochester, New York, he preached 98 sermons that caused a ruckus.  Shopkeepers closed their businesses, posting notices urging people to attend Finney’s meetings. Reportedly, the population of the town increased by two-thirds during the revival, and crime dropped by two-thirds over the same period. In 1900 church historian Susan Hayes Ward wrote “The hearer at the time felt that Mr. Finney was talking to him personally rather than preaching before an audience…He did not speak about sinners in the abstract, but he talked to the individual sinners before him.”

In 1832 he began an almost continuous revival in New York City as minister of the Second Free Presbyterian Church, organized especially for him. In the middle of his installation service he became ill with cholera. others who caught the disease that day died. Finney almost died, as well, and it was months before he could take up his full duties.

From its inception the church embraced Finney’s passionate anti-slavery stance.  Black worshipers were welcomed (albeit in a separated section)–a policy which, coupled with Finney’s outspoken abolitionist sermons, did not sit well with many outsiders and newspapers.  During the riots of 1833, a mob broke into the church and attacked black members.  On July 8 the Courier and Enquirer spat “Another of those disgraceful negro-outrages &c., occurred last night at that common focus of pollution, Chatham Street Chapel.”

In 1834, he moved into the huge Broadway Tabernacle his followers built for him. He stayed there for only a year, leaving to pastor Oberlin Congregational Church in Ohio, and to teach theology at Oberlin College. In 1851, he was appointed president of the college, which gave him a new forum to advocate the social reforms he championed, especially the abolition of slavery. Oberlin College, under his leadership, was the first college to admit woman and black/brown people to be educated with white men.

Finney married evangelism to social reform, New Testament evangelism with Old Testament prophecy, piety with radicalism, and conversion with action. He got people talking and acting. He was not content with them simply receiving or consuming. His commitment to Jesus meant taking care of the poor and the needy, and his deep commitment to social reform was seen in the radicalism of Oberlin College and in his major push to end slavery. Those he inspired continued to take risks in order to relate to each other and change the world.

Nothing tends more to cement the hearts of Christians than praying together. Never do they love one another so well as when they witness the outpouring of each other’s hearts in prayer.

No government is lawful or innocent that does not recognize the moral law as the only universal law, and God as the Supreme Lawgiver and Judge, to whom nations in their national capacity, as well as individuals, are amenable.

When there are dissensions, and jealousies, and evil speakings among professors of religion, then there is great need of a revival. These things show that Christians have got far from God, and it is time to think earnestly of a revival.

Don’t get yourself shot, but how should you stir up enough trouble being a Christian that you arouse opposition? Ever think of doing that? Ever make a plan?

Pray for revival to break out. It would be great if people shut their business down (or turned off the TV) to come meet with us and experience the presence of God!

One Reply to “August 16 – Charles Finney”