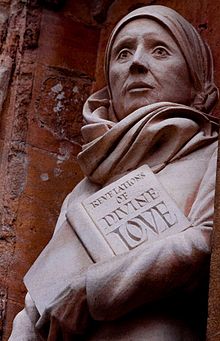 For this reason I bow my knees before the Father, from whom every family in heaven and on earth takes its name. I pray that, according to the riches of his glory, he may grant that you may be strengthened in your inner being with power through his Spirit, and that Christ may dwell in your hearts through faith, as you are being rooted and grounded in love. I pray that you may have the power to comprehend, with all the saints, what is the breadth and length and height and depth, and to know the love of Christ that surpasses knowledge, so that you may be filled with all the fullness of God. — Ephesians 3:14-19

More thoughts for meditation about Julian of Norwich

Julian of Norwich (1342-c.1416) is known to us almost only through her book, The Revelations of Divine Love, which is widely acknowledged as one of the great classics of the spiritual life. She is thought to have been the first woman to write a book in English which has survived.

We do not know Julian’s actual name but her name is taken from St. Julian’s Church in Norwich where she lived as an anchoress for most of her life. We know from the medieval literary work, The Book of Margery Kempe,  that Julian was known as a spiritual counselor. People would come to her cell in Norwich  to seek advice. Considering that, at the time, the citizens of Norwich suffered from plague and poverty, as well as a famine, she must have counseled a lot of people in pain. Yet, her writings are suffused with hope and trust in God’s goodness.

Julian’s Revelations of Divine Love is based on a series of sixteen visions she received on the 8th of May 1373. Julian was lying on, what was thought at the time, to be her deathbed when suddenly she saw Christ bleeding in front of her. She received  insight into his sufferings and his love for us. Julian’s message remains one of hope and trust in  God, whose compassionate love is always given to us. In this all-gracious God there can be no element of wrath. The wrath — “all that is contrary to peace and love — is in us and not in God. God’s saving work in Jesus of Nazareth and in the gift of God’s Spirit, is to slake our wrath in the power of his merciful and compassionate love.” Julian did not perceive God as blaming or judging us, but as enfolding us in love. Famously, Julian  used women’s experience of motherhood to explore how God loves us, referring to Jesus as our Mother.

The Revelations of Divine Love comes to us in two versions; the first  (the short text) written shortly after the revelation given to Julian , the second  (the long text) written twenty years later.  The long text is greatly expanded to include her meditations on what she had been shown. Today, only seventeenth century copies of earlier manuscripts of the long text, and  fragments from the fifteenth century survive.

Julian recounts that she was thirty and a half years old when she received her visions and this is how we know she was born in 1342. (An editor to one of the surviving manuscripts speaks of her as a “devout woman, who is a recluse at Norwich, and still alive, A.D. 1413”).  There is further evidence to be found in a contemporary will that she was alive in 1416, and that she had a maid who lived in a room next to the cell.   Apart from that, we know  nothing else about Julian’s life. However, reading Revelations of Divine Love, reveals  an intelligent, sensitive and very down-to-earth woman who maintains her trust in God’s goodness while addressing doubt, fear and deep theological questions.

Interest in Julian’s writings has grown over recent decades  This has been as more and more people have discovered the significance of her book. Her lyrical language and positive image of God  speak to the modern reader. Her work is well-respected by theologians, historians and literary scholars, and there are now dozens of translations of her Revelations, together with countless commentaries. Modern poets and writers as diverse as T.S. Eliot, Denise Levertov, and Iris Murdoch reference Julian in their writing.

Julian’s Shrine, off Rouen Rd. in Norwich (above), is visited by pilgrims from all over the world.

If there is anywhere on earth a lover of God who is always kept safe, I know nothing of it, for it was not shown to me. But this was shown: that in falling and rising again we are always kept in that same precious love.

God, of thy goodness, give me Thyself;
for Thou art enough for me,
and I can ask for nothing less
that can be full honor to Thee.
And if I ask anything that is less,
ever Shall I be in want,
for only in Thee have I all.

Our Savior is our true Mother in whom we are endlessly born and out of whom we shall never come.

Truth sees God, and wisdom contemplates God, and from these two comes a third, a holy and wonderful delight in God, who is love.

Julian’s revelations are not unattainable to any person who is seeking. maybe we all have some kind of early experience that informs much of our lifelong walk with Jesus. Spend some time seeking. Let God clarify for you just what you should be hearing. If you really want to take Julian’s example, you will dare to write it all down and meditate on it another day.